Home › Advice › Dating A Younger Man – Is It Worth It?

Dating A Younger Man – Is It Worth It?

In a previous post, Doctor’s Orders: Date A Younger Man, I filled you in on my 40-something year-old doctor’s relationship with a man in his 20’s, and her suggestion that I consider doing the same. I saw no problem with such a scenario as long as the relationship is healthy (hers is unhealthy).

Read along as I outline the pros and cons that come with older women dating significantly younger (10+ years) men. These women are sometimes referred to as MILFs (“Moms I’d like to f*ck), or cougars. Just for reference purposes, I have a tiny bit of experience. 😉

The Upsides to Dating a Younger Man

Now, some would argue that older men (30s and beyond) are more experienced sexually and are therefore more attuned to “making love” versus just having sex.

I thought so too when I was 25, but really, sexual chemistry is based less on age and more so on a willingness of both partners to express and meet one another’s needs. There are younger men who are smart enough to know that making the effort to meet a woman’s needs (whether she likes it slow, rough, kinky, etc.), that means winning. Sex becomes “amazing.” 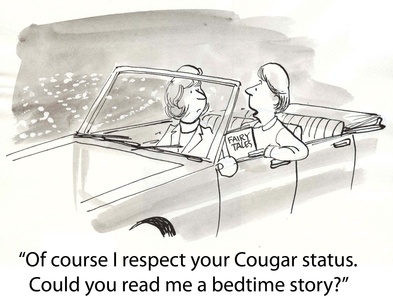 The Downsides to Dating a Younger Man

I could’ve added one more bullet point for family conflict.

It’s risky to date a significantly younger man, hence the pros and the cons. However, the same is true for dating an older man, or any man for that matter.

The short answer to the title question is: it depends on what you want. If you’re looking to date a younger man, just employ the same standards you would if you were choosing an older one and make sure he at least has a sense of responsibility. If it’s serious, make sure he UPGRADES you. Happiness, above all else, is key.

What are your thoughts on older women dating younger men? Can you think of any more pros and cons? Comments are most welcome!