Home › Advice › What Makes A Man or Woman Special

What Makes A Man or Woman Special

Is Amazing Worth Waiting For  ? I posed that question some time ago, and most people, myself included, answered YES.

In reading Mars and Venus on a Date (Again), I realized that men and women may take different emotional routes to AMAZING, but eventually most of us aspire to the same thing – a thriving partnership.

According to Dr. Gray, here’s What Makes A Woman Special to a man: 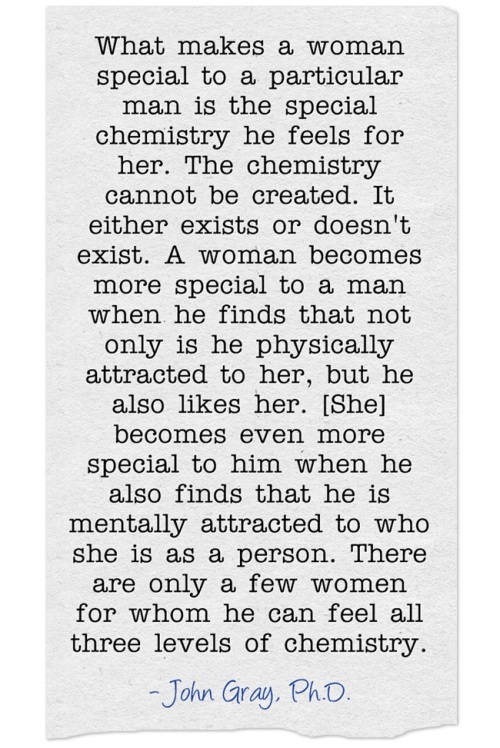 I’m not a man, so I have no first-hand perspective, but I’ve had men talk marriage and ask for an exclusive relationship on or after a first date! Major turnoff, but no doubt they were stuck on physical attraction. Granted, I bring more to the table than that, but can you really gauge compatibility within a couple of hours of meeting? Enough to suggest that I take myself off the market?

Recently a guy texted me after a first meeting stating his hopes for a long-term relationship with me. When I saw him again, he asked if I’m on birth control or had tubal ligation and re-stated his strong views on marriage. The following weekend during a snow storm: “Come over. Let’s get snowed in.”

I think not. (Different story altogether, but why would I drive in treacherous conditions to get “snowed in” with a guy I barely know? A wood-burning fireplace ain’t THAT cool. I want my life.) But if I was feeling him…. 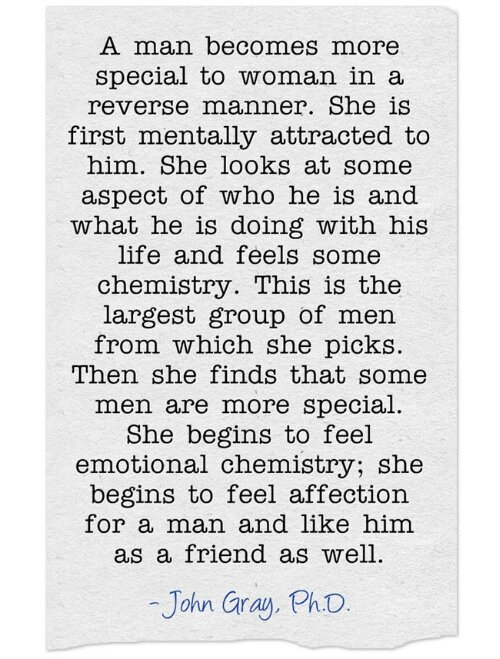 This rings a bell for me because I’ve learned that I’m more attracted to men who are living their lives on their own terms and doing it well. They’re passionate about something and very expressive about their life’s work and or passions. They’re disciplined, and ambitious and their communication style is energetic.

Notice, I omitted physical qualities. My eye naturally wanders toward taller, chocolate-looking men, but those attributes won’t capture my heart. I love a well-defined back and nice, sculpted thighs on a man, but what beats mental, emotional, and spiritual chemistry? A nice, chiseled body is just icing on the cake! But – if a man can stimulate me mentally, he’s earning points.

Dr. Gray also notes that when you feel instant sexual attraction to someone you just meet, that’s unhealthy chemistry based on your expectations for who that person is, versus who they REALLY are. And I bet we all have stories about unmanaged expectations.

We all have differing views on what makes a man or woman “special,” but there’s something to be said about building romantic chemistry by moving through different stages of dating – potentially leading to Amazing.

What do you think of this perspective on how we build chemistry in romantic relationships? What makes a potential partner special to you, initially and over time? Are men more hung up on physical attributes than women?